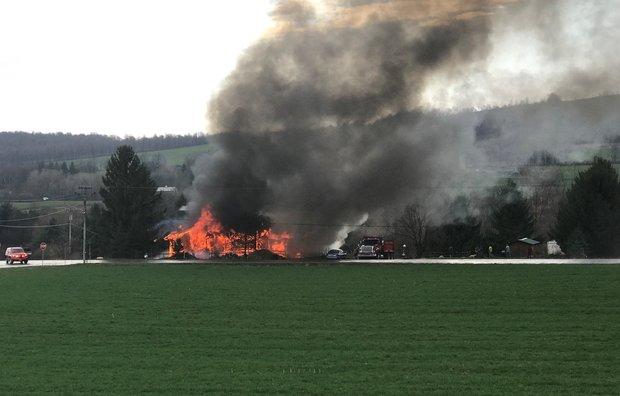 A two-story home at 2491 Pompey Center Road caught fire sometime before 5 p.m., prompting a response from at least four fire departments, as well as county sheriffs and multiple ambulance companies.

All residents of the house made it out safely, according to emergency dispatchers. The fire was first reported shortly before 5 p.m.

Crews on scene reported windows blowing out of the home. As of 5:30 p.m., firefighters were planning to cut a hole in the roof to battle significant flames in the attic.

Onondaga County tax records list Melissa A. Fox as the owner of the home.

We would like to introduce our two newest career staff to the department! Matt Parker (Left) comes to us as a transfer from the Fayetteville fire Department and will be working as a firefighter/paramedic on the C-Shift. Ross Hoham (Right) also transferred from the Fayetteville Fire Department as a firefighter/paramedic and has been promoted to the position of Captain. We welcome both of you to the department and look forward to working with both of you. ... See MoreSee Less

YAYYA! YOU GUYS ARE THE BEST!

It is with great sadness that we announce the cancellation of our 2020 Annual Junior Firefighter Summer Camp. Please see the attached letter for details. We look forward to resuming the camp in 2021! Stay healthy and safe everyone! ... See MoreSee Less

This is such a wonderful program. Andrew loved it when he was a camper, it made him want to continue with all of you and be a volunteer. As parents, we were so grateful for this program, it helped shape who he is today. He'll be back soon!!

Futer fire fighter ben is sad over this news. But hes ready for 2021